Wake Responsibility and You

the path or course of anything that has passed or preceded

The term “wake” should be familiar to every boater. Anytime your boat is traveling and leaving waves behind it, it’s creating a wake. If your boat has an engine, it produces a wake. If you’ve boated often enough, you’re sure to have been through a few “No Wake Zones”; areas where you must keep your engine at idle speed in order to produce NO WAKE. 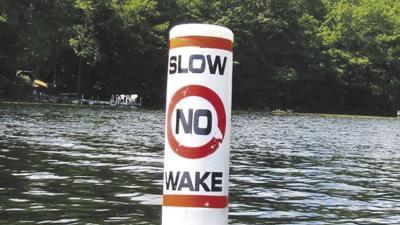 As simple as the term “wake” is, it has taken a whole new tone over the last decade or so. With the advancement of wake boat technology and wake sports increasing in popularity; “wakes” have become a central conversation in boating communities.

In this blog, we’ll explore why “wake responsibility” has become such a central conversation to boating, especially as it relates to the wake-sports boom.

It Starts With Erosion

the gradual decline or disintegration of something 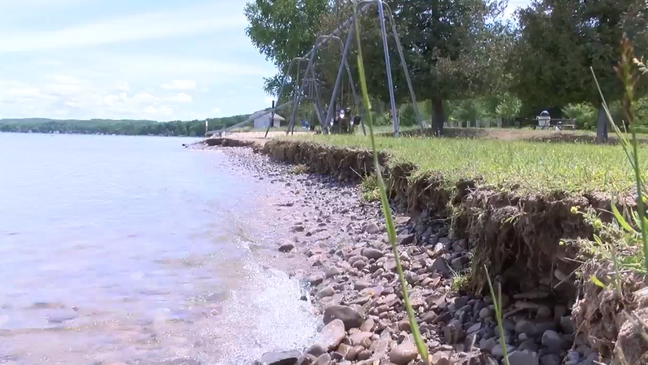 Any disturbance to the water - surface or subsurface - is going to create erosion. The bottom of your favorite lake is always being shaped by the movement of the water above. However, the surface is more tumultuous than deeper areas due to weather, boating, the annual freeze & thaw, etc. While erosion may not be as obvious down below, it can become VERY obvious along the shoreline.

Erosion is a major problem, and the fact of the matter is: boat wakes cause it.

Lakes with heavy boating traffic experience less shoreline vegetation and ecological habitat - and often more algae - due to water quality issues and the sediment getting constantly churned up by the wakes of boats.

We may not love the weeds and reeds along the shoreline of our favorite lake, but vegetation and habitat (both above and below water) is critical to preventing erosion. Every year, lakeshore homeowners are watching more of their property slip into the proverbial sea due to natural - and unnatural - shoreline loss.

But it’s about more than just erosion. Heavy boating churns up silt, often saturating the shallower water with sediment and suffocating vegetation growth. Vegetation that creates shoreline habitats that are nesting areas for birds, frogs, turtles, and other aquatic mammals can be easily disturbed by excessive wakes.

Vegetation is not only critical to underwater and above-water life; healthy vegetation and habitats create clearer, cleaner water.

Along most shorelines are docks, watercraft lifts, and mooring areas that homeowners install to make the most out of their shoreline. These areas and the objects in them are vulnerable to high boat traffic and can be severely damaged by repetitive and negligent boating activity.

Too large of a wake, too close to the shore can cause major damage to docks, lifts, boats, and could even injure someone. Every season we hear more stories about damaged property, swamped boats, overturned kayaks, and more, all resulting from irresponsible wakes.

DID YOU KNOW YOU CAN BE HELD RESPONSIBLE FOR PROPERTY DAMAGE DUE TO YOUR WAKE?

The owner of any vessel is personally responsible for any damage to life or property resulting from a wake or swell created by the negligent operation of the vessel, where the vessel is being operated with his consent. Always maintain safe speeds and follow no-wake laws.

This means, if you (or someone you’re allowing to drive your boat) fly by in your pontoon too close to a dock, and someone falls off that dock and hurts themselves from the resulting wave; you’re responsible for any repairs needed to the dock AND any injury you may have caused to the person who fell off.

Which brings us to Etiquette…Part I

We’ll talk more about etiquette in a bit; but as it pertains to wakes - it is proper etiquette to keep your distance from the shore, especially when moving fast. This will help reduce damage to shore and habitat (or potential damage to property) caused by your wake.

All engined boats create wakes. So, why are wake boats and wake sports so often being targeted as the enemies of the lake?

There are quite a few reasons, many of which are legitimate concerns. Here are some realities about wake boats (and their differences from other types of boats) that are worth considering:

By the nature of their design a wake boat’s prop sits more toward the center of the hull and therefore deeper into the water. Because of this, the initial displacement of water (what creates a wake) happens deeper in the water, potentially causing more environmental damage.

Definitely. Larger wakes are the whole point of owning a wake boat. The placement of the prop helps to create a larger initial wake already. In addition, wake boats have ballast systems to weigh down the boat in different ways - in order to create even larger wakes than what would be possible with the prop alone.

They are because they’re designed to be. Modern wake boats have dozens of ballast settings that can dial in everything about the wave being produced behind the boat. Height, shape, and length of the wave can all be adjusted to fit anyone’s riding preference.

The fact is, as water and wakesports have become more ingrained into life on the water over the last couple decades, we’re beginning to see more multigenerational wakesport enthusiasts. Also, with the adjustability of today’s modern wake boats, more and more people are able to enjoy wake sports much later in life.

While yes, we fully acknowledge that wake and watersports tend to attract a younger crowd in general, we firmly object to the opinion that they’re all young and irresponsible. We sell hundreds of boats each year and all of our wake boats are sold to responsible professionals with families that have been wake sporters and boaters since childhood.

Of course, there are exceptions. We get that. However, in our experience wake boaters are some of the most enthusiastic about boat safety and boating responsibility.

Myth: Wake Boats Cause More Boating Deaths Than Other Types of Boats.

This opinion comes from some pretty misleading statistics. The US Coast Guard publishes accident, injury, and fatality statistics each year. Yes, it is true that “Open Motorboats” - the classification to which wake boats belong - have the largest number of incidents and deaths of any type of watercraft.

However, this “open motorboat” category includes fishing boats, bowriders, and any other motorboat with an open bow. This data is reported from all over the country and also includes oceanic travel.

When you take a deeper look at this data, most boating fatalities are caused by drowning due to dangerous conditions on open water, as well as people not wearing life jackets - not accidents due to irresponsible operation of wake boats.

Any sort of extreme sport tends to get a reputation for attracting a partying crowd. And yes, wake sporters do tend to love their jams. Which is why wake boat sound systems can get downright monstrous these days.

The reality is that most wake sporters do it to relax and relieve stress. There is something beautiful about tuning in to your body and the water while you board or surf - it can be a quite relaxing experience.

Most of us seek the “chill” of wake sports as much as the “rush”.

So What Is The “Wake Responsibility” Movement All About?

There is no doubt boating has become more popular than ever. Lakes are becoming more crowded, and as a result, we are seeing more shoreline and habitat degradation each year. Despite this erosion being - in large part - the result of just way more boaters, wake boaters are finding themselves at the center of the discussion; for all the realities and myths listed above.

This significant shoreline loss has brought calls on some lakes to limit the use of wake boats, and even other lake associations have banned wake boats altogether.

That hasn’t stopped wake sports from increasing in popularity though. Boat and board technology has gotten to the place where more people can ride the water earlier and later in life. Even those with certain disabilities are now able to safely ride because of continuing innovation in wake sports.

Many members of the boating community blame wake sports for the increased erosion which has sparked an increased awareness of wake impact as well as a movement to make a difference.

In response to a large part of the boating community blaming water sports for their shoreline erosion, the Water Sports Industry Association (WSIA) has initiated the “Wake Responsibly” campaign. This campaign’s goal is to bring awareness of the harmful effects of wakes and provide a set of tips to help ensure wake boaters are mindful of their wake’s impact.

The WSIA offers these tips:

Which Brings Us Back To Etiquette...Part 2

All of this brings us back to the one thing that can help solve the wake-on-the-lake problem: etiquette. These additional tips will help you be a good steward of your sport AND the lake.

Your time is important to us, so let us dedicate ours to you.

For your convenience and preference, we have in-person or virtual appointments available. Simply fill out this form, and we'll have a member of our expert sale team reach out to you to confirm details.

ASK US A QUESTION

Complete with videos, articles, customer testimonials, and brochure downloads, our Customer Corner is all about you!